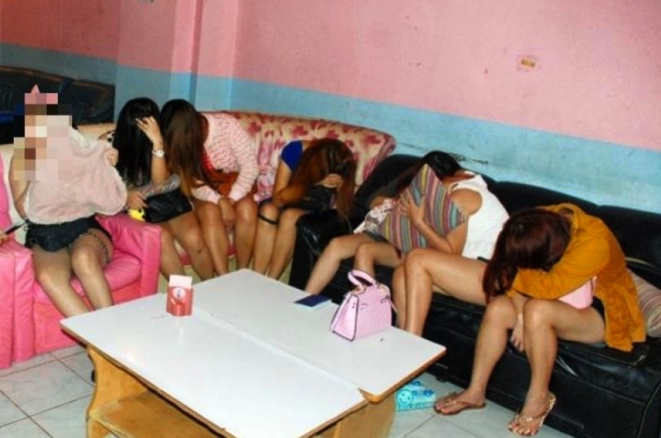 PRANBURI: — Officials investigating human trafficking and underage sex at Blue Star Karaoke in Pranburi have found a strong connection with the infamous raid on the Nataree Soapy Massage parlor raid in June.

One of the Blue Star girls – who is thought to have been underage at the time – was at Nataree where she had her virginity sold for 80,000 baht by human traffickers.

And just like Nataree, the raid at the Blue Star in Suk Jai Road has netted an account book with the name of three policemen and one reporter. It mentions codenames, payments and even dates for
collection of the bribes.

And as the investigation widens it has been discovered that a girl’s age was altered on work permit documents from 16 to 20.

Prajuab Khiri Khan governor has ordered the Blue Star shut and called for a province wide crackdown that could see the popular bar area of Soi Bintabaht in Hua Hin affected with closures.

The raid on the Blue Star at the end of last week was the culmination of a three month investigation by an NGO as a link was found with Nataree in Rachadpisek Road, Bangkok, that was raided on June 7th. At Nataree a “bribe book” was found full of names and several police from the Huay Kwang station were transferred. Some 115 mostly foreign girls were arrested.

At Blue Star one hilltribe girl admitted to being between 16 and 17 years of age – under the legal age allowed to be a sex worker. She had previously been at Nataree and told investigators that pimps there arranged for her virginity to be sold for 80,000 baht.

She was in possession of a pink work permit document on which the age had been changed from 16 to 20. It stated her date of birth as July 1st 1996. And contained the name and seal of Wanphen Kittisombunsuk at the Samut Sakorn labour department. Investigations are underway as to how this occurred but reporters understand that a payment of 6,500 baht was paid in connection with the changes to the girl’s work credentials.

At Blue Star a ledger contained initials of three policemen. Two were indicated by the Thai letter อ (Or – Ang) and one by the letter น (Nor- Noo). Each of the officers was due to receive 3,000 baht a month on a date specified. A payment of 1,000 baht believed to be scheduled to an unnamed news reporter was also indicated in the ledger.

Prajuab governor Thawee Niritsirikun ordered the immediate closure of Blue Star Karaoke and many over 18 girls selling sex there are expected to be deported for having irregularities on their work permits. Thawee said that karaoke lounges, restaurants and beer bars throughout the province will be stringently checked and he mentioned specifically the Soi Bintabaht tourist area of Hua Hin for action.